Well done to Lois Banadaki who has just qualified for the Regional artistic swimming squad (synchronised swimming), she is representing the Midlands. This team feeds into the GB youth squad so it is a huge achievement. She will be in a competition in Bristol in June where the Midlands squad will compete against all the other national regions.

Congratulations to Calum and Thomas Stone who completed a cycling challenge during October Half Term to raise funds for Nottingham City Hospital. 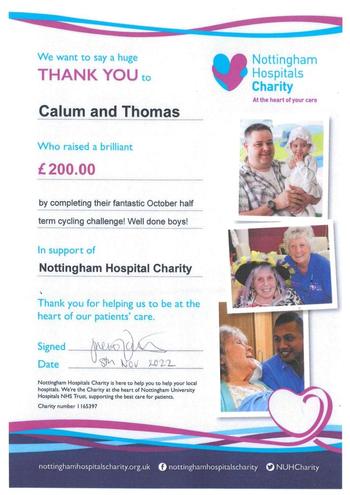 Well done to Robin Sykes on  winning the Under 13 Nottinghamshire County Championship on Sunday, winning 5 of 6 games. He received a trophy and £50. 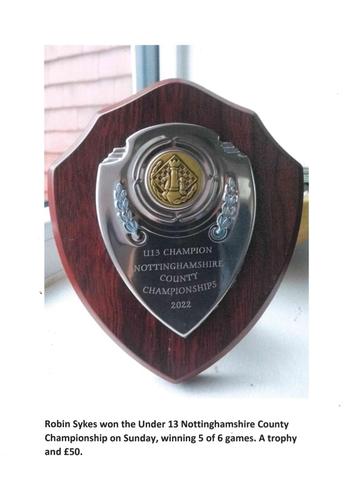 On Saturday 9th of July, I did The Yorkshire Three Peaks 24 mile walk for the charity Shelter. I chose Shelter for my charity because I think that everyone deserves a home and that everyone should be treated equally. Last year, I did my own walking challenge for the same charity, which I called Lily’s Three Peaks Challenge, which was Scafell Pike, Snowdon and the Yorkshire 3 Peaks over several weekends. So far, I have raised over £1,180 for Shelter. This year I have completed the whole Yorkshire 3 Peaks walk in one day, which was very long, hard and hot. This is a challenge where people try and complete the walk in 12 hours or under and I completed it in 11 hours 18 minutes, including breaks. I woke up at 4:45 in the morning to get ready and started the walk at 6:15am and I was up the first peak at 7:30am. I did 1500m of climbing plus 24.5 miles of walking which is nearly a marathon, and in total I climbed higher than Ben Nevis (a massive mountain in Scotland). The hardest peak was the middle one (Whernside), it was very long and tiring with lots of big steps.  Along the way I had some giant Skittles to help me push through the difficult bits. At each peak, I felt very proud of myself when I got to the top, especially the last one because it meant I only had 6 miles left. My parents have told me that I will never have to do a long walk again! Yay!!! 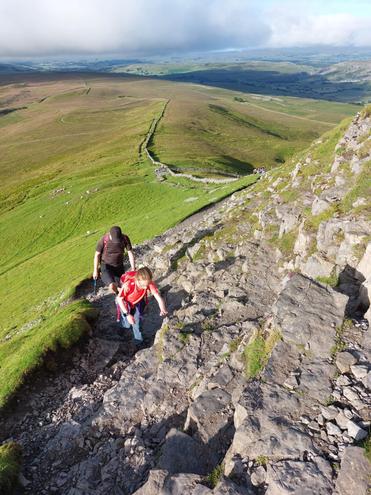 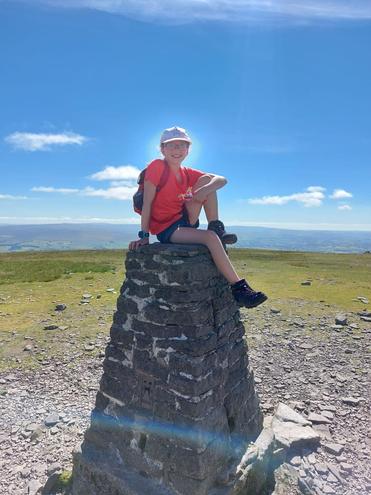 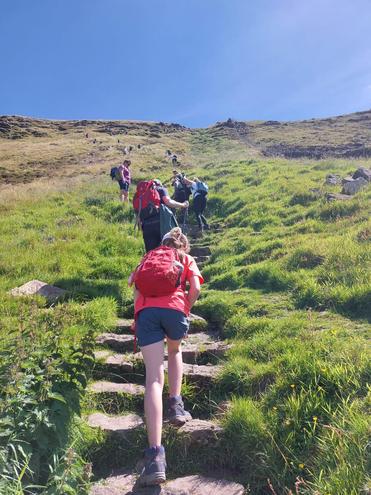 Many congratulations to  Grace, Emily, Jessie and Lois who competed in their first national competition last Saturday at the Artistic Combo Cup at the London Aquatics Centre, Olympic Park.  They finished 5th out of 15 teams with only 300th of a point between them and the 4th place - what a fantastic acheivement!

They all did their team (Team Deeper) and club, Bramcote Aquastars proud. 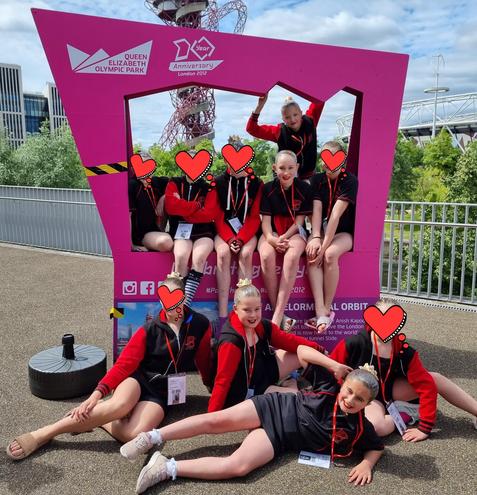 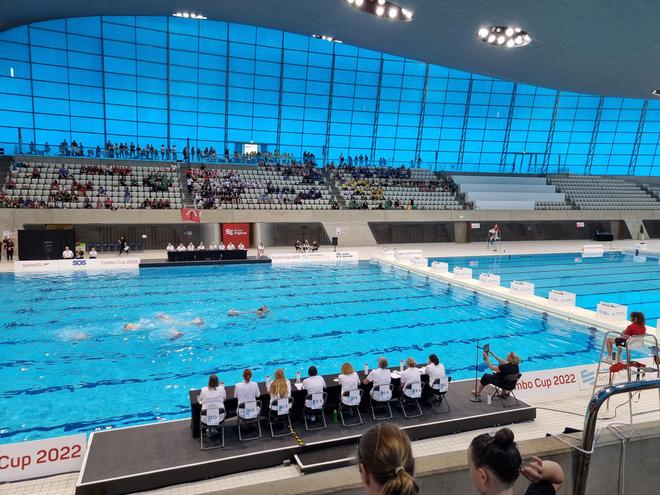 Olivia and Elli decided to organise a bake sale to raise money for Ukraine. They raised over £60  - well done girls! 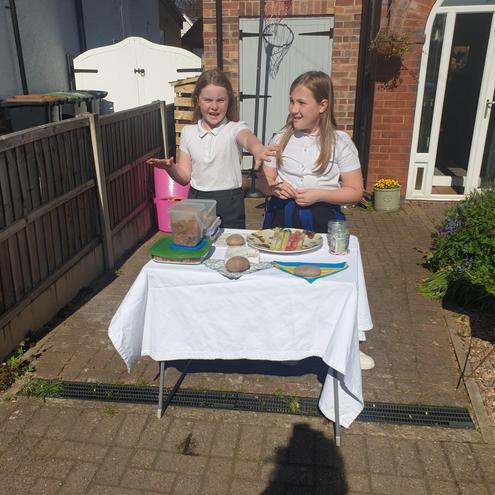 Well done to Robin Sykes who was selected for the under 9s Nottinghamshire County Chess Team, playing against other counties in the North Zone. Notts came top and Robin got 3 out of 3 wins, in super quick time.

Good luck Robin from all at The Lanes! 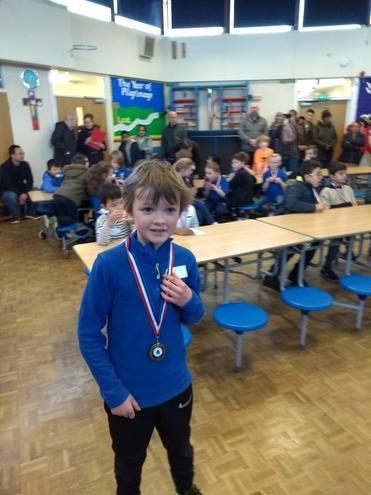 Congratulations to Emily , Grace  and Jessie  who all competed as part of Bramcote Swim School (known as Team Deeper), at the Regional Age Group Championships Competition on Saturday 5th March. It was their first competition together as a team of 10 girls in the under 12s category.

They were fantastic, did their club proud and came away with gold medals. 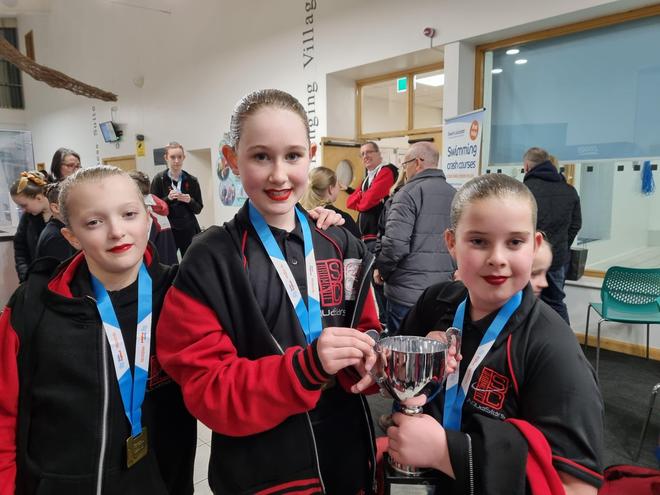 Congratulations to Poppy Pearsons who was the 'December Beeston Local News photo competiton winner'. Her winning picture which was taken at Derwentwater, Cumbria can be seen below. 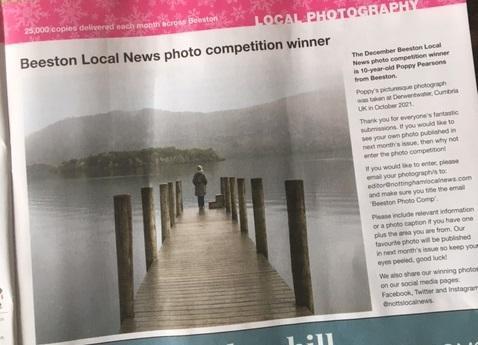 “In year five, I wrote a Tsunami story based on a movie. During lockdown, I edited it because it had to be exactly 1000 words and my mum entered it into a writing competition. I also wrote a poem. Both pieces of writing impressed the judges and they were published in a book.” 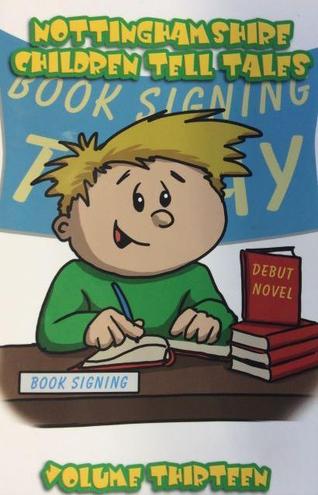 Congratulations to Bailey Haynes who won a gold medal in the Nottinghamshire Amateur Athletics Competition. He took part in the 600m race, 75m race, Howler Javelin and Long Jump and scored a total of 260 points. Well done Bailey!

Well done to Zackary Corderoy who passed his Grade 1 Piano Practical in July, he shared his achievement with his class.

Congratulations to Charlie  (Y2 pupil) who recently won at the BMX Brits meaning he is the British champion for his category!

He did 3 races then a quarter and a semi final before the final. The top 16 from the quarters go to the semis and top 8 go to the final. Charlie came 3rd in his first race, then won every other race after that.

There were 36 in his class and Charlie had the fastest hill start and lap time of the day out of all his class.

Being British champion means he is currently the fastest 6 and under male in the whole of the UK!

I did the three peaks challenge with my Mum and Dad to raise money for a Nottingham-based charity called 'Open Homes'. It is a charity that helps prevent homelessness in young people.

The challenge started with a long long drive to Scotland where we started Ben Nevis the biggest of the three climbs. We set off at 4.10 PM, it was a nice climb and felt like the easiest of the three because we had fresh legs.  Before too long we started ascending into the clouds and it became damp and cold. There was lots of snow at the top and it was very windy. There was no time to stop for long but we took a quick picture and my mum patched up her blisters before we headed back down. The change in weather as we came back through the clouds was amazing, we were soon very warm again. With sore legs, we got back to the car at about 9 pm.

There was no time to rest, as soon as we got down the first mountain we were sorting out our kit and food for the next and setting off for Scafell in the Lake District. My Pops did an incredible job driving us so we could try and eat and rest in the car. It was tricky because the roads were windy and sleeping uncomfortable.

We arrived at Scafell at 2.30 AM and after finding our head torches we started climbing in the pitch black. This climb was much steeper and rocky, we had to cross a river and pull ourselves up some very steep sections. It was blowing a gale and freezing cold at the top so we didn't stick around for long, just got another quick snap. The sunrise on the way down was amazing! We got back to the car at 6.45 AM and headed to our last mountain Snowdon.

We struggled to eat in the car because the roads were so windy and we were very very tired. It was a 4 and a half-hour drive to Snowdon so we tried to get some rest. It was good to know we only had one more mountain to go, and a generous donation came in on the journey which spurred us on.

We set off up Snowdon at 11.40 feeling incredibly tired and sore. This was by far the hardest climb because we were so tired and sore. It was tough and took us to the absolute max. I had been struggling to eat and so had little energy left and felt like I couldn't complete the climb. After somehow making it to the top we had a little less than three hours to get down and complete the challenge in 24hrs. The problem was we were tired, my dad was in pain and the mountain was busy so we were often held up on tricky sections of rock. We didn't think we were going to make it, so practically ran the last few kilometers back to the car. We made it and got to the car park at 3.21 PM (almost 50 mins to spare!).

We were so happy but exhausted. Getting into bed that night felt incredible and the next morning my Nana bought me breakfast in bed. Once I had recovered a bit I felt so proud of myself that I had the determination to keep going and complete the challenge.

We raised £2350 for our charity. Thank you to everyone who donated.

Unfortunately not the ones with chocolate chips.

Some cookies are necessary in order to make this website function correctly. These are set by default and whilst you can block or delete them by changing your browser settings, some functionality such as being able to log in to the website will not work if you do this. The necessary cookies set on this website are as follows:

Cookies that are not necessary to make the website work, but which enable additional functionality, can also be set. By default these cookies are disabled, but you can choose to enable them below: